Everything about echinops plant : How to Plant & care for fern

Echinops plant is a genus of about 120 species of flowering plants in the family Asteraceae, commonly known as globe thistles. They have spiny foliage and produce blue or white spherical flower heads. They are native to Europe, east to central Asia, and south to the mountains of tropical Africa. Globe thistle is the host plant of weevil Larinus vulpes.

read more : Everything about blue eringo plant : How to Plant & care for fern 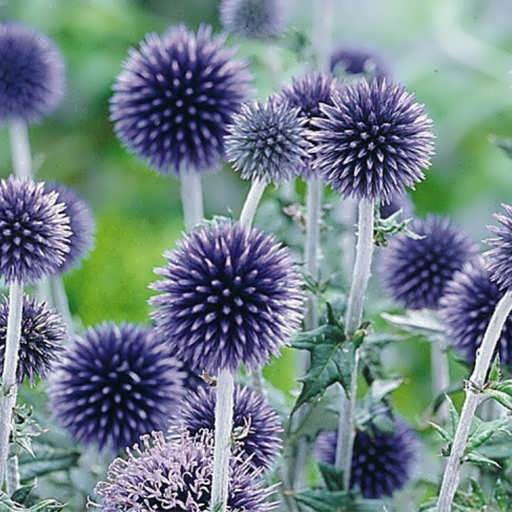 All globe thistle varieties (Echinops sp.) belong to the daisy family (Asteraceae). As the name suggests, globe thistles are related to the other thistles, such as the medicinal milk thistle (Silybum marianum) or the prickly creeping thistle (Cirsium arvense). From this diverse species, four are commonly found in gardens. The southern globe thistle (Echinops ritro) is native to southern and eastern Europe.

The Echinops bannaticus, also known as the blue globe thistle or the Hungarian globe thistle, is native to southeastern Europe. The glandular globe thistle (Echinops sphaerocephalus) is a Eurasian variety that grows in southern Europe, across the Caucasus mountains and into the Chinese province of Xinjiang.

Globe thistles are perennial plants and entirely winter hardy in our climate. As is common for thistle plants, they have spiky, dark green leaves that are deeply notched and serrated. In spring, these leaves initially form a rosette close to the ground.

In summer, long, slightly fuzzy, silvery-white to reddish flower stalks stretch up towards the sky, adorned with a few small leaves. The many small individual flowers cluster together at the tip of the flower stalk as a round head. The petals are star-shaped and bloom in white, purple, or blue. The flowering time of the globe thistle begins in July and lasts until August or September, depending on the variety. Echinops plants are hardy perennials, and after they have withered, will grow back again the following spring.

read more : Everything about teasels plant : How to Plant & care for fern

This plant in most provinces of Iran, especially Yazd (Mehriz), Khorasan, Fars (Shiraz, Jahrom), Isfahan, Kerman, Kermanshah, Hamedan, Lorestan, in the west on the slopes of Mount Peru and in Golpayegan, Tafresh, Oshtrankooh, Tabriz, Semnan ( Shahroud), Mazandaran, Tehran, the slopes of Alborz, Damavand, Zanjan at an altitude of 1800 meters above sea level and scatter and crop collection is more or less done in these areas.

In many parts of Iran, despite the presence and abundance of echinops, no traces of insect activity and presence are observed. In Europe, Asia and Africa, a variety of thistle plants are also widespread.

The globe thistle comes in different types and varieties; they differ mainly in flower colour and growth height. 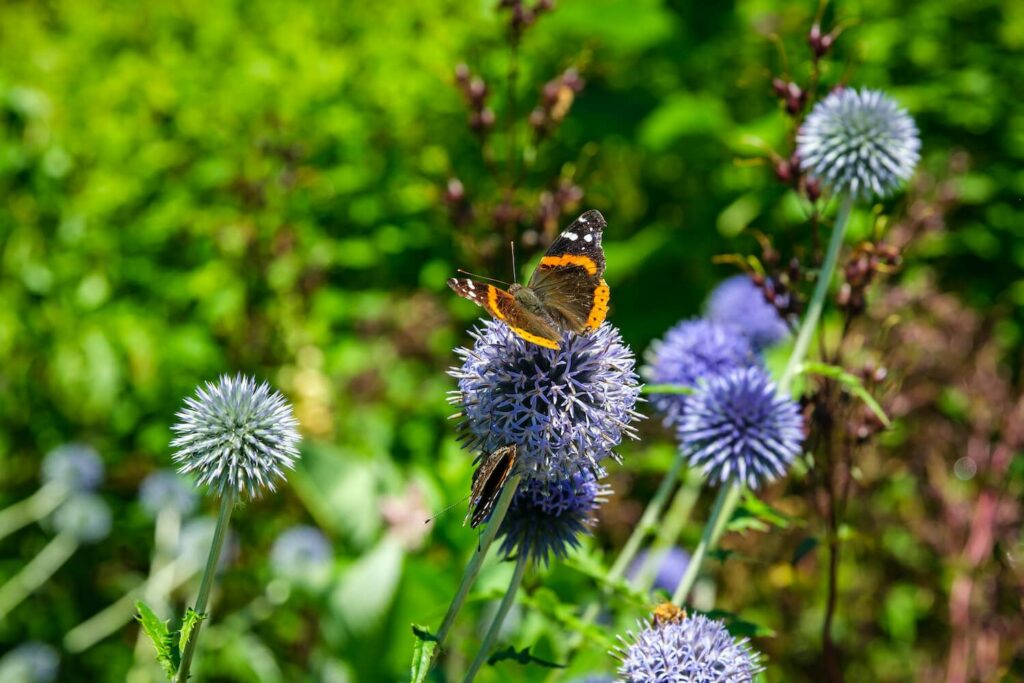 read more : Everything about scabiosa flower : How to Plant & care for fern

Echinops plants are very hardy. They are drought-tolerant and can tolerate summer heat, even in full sun locations. Echinops grow very well upright and sturdy in loose, relatively humus rich and dry soil. In locations that are too moist or rich in nutrients, the globe thistle tends to fall over.

In prairie and alpine gardens, Echinops plants are a real eye-catcher that can be combined well with other drought-tolerant plants such as yarrow (Achillea millefolium), Gypsophila ( Specifications of gypsophila flower ) or various grasses. Globe thistles are often not the food of choice for pests, so there is no risk of them being eaten by slugs. Echinops should be planted in spring, or early summer.

read more : Everything about yarrow flower : How to Plant & care for fern

How to plant Echinops in pots

Globe thistles, like most perennials, are best planted in autumn so that they can develop sufficient roots before winter and do not start their energy-sapping sprouting until the following year. Potted Echinops plants should not be overwintered outdoors because the risk of the planting container freezing completely and destroying the roots is very high.

In garden beds, on the other hand, there is no danger of this, as the entire soil never fully freezes. In garden beds, keep a plant spacing of about 60 to 70cm between plants, or about two Echinops plants per square metre. Smaller and more compact Echinops varieties, such as the ‘Platinum Blue’, can be planted closer to 40 centimetres apart. In the weeks after planting, lightly water your globe thistle plants regularly.

read more : Everything about mediterranean sea holly plant : How to Plant & care for fern

How to grow echinops throughout the season

Echinops is an upright, clump-forming perennial that has thistle-like texture (thorns included) and a large taproot. It blooms from July to August with a spiky golf ball-sized flower head. The sometimes-branching stalks grow from a basal foliage rosette.

If it is in a desired location, it readily self-sows, so your plant could start to naturalize an area. If that’s not the desired intention, Echinops blooms can be deadheaded (snipped off) before the seeds fall to easily prevent this occurrence.

Species that are 4 feet tall or less typically do not need to be staked. The stalks are very strong and durable. Staking might be necessary for taller species or stems with particularly large flower heads that can weigh it down.

Echinops is fairly drought-tolerant. Once the plant is established, it should perform great without any supplemental watering. However, during its first season of growth and directly after being planted, it should be watered regularly until it is established.

No fertilizing is necessary as Echinops performs well in nutrient-poor soils. It will not harm the plant to have a mild slow-release fertilizer applied in spring if desired.

Without any deadheading, Echinops will readily self-sow and spread throughout an area. To reduce self-sowing, Echinops can be deadheaded after flowering. To do so, simply cut the seedhead stalk down to the basal foliage. Deadheading early enough will encourage an additional autumn bloom.

read more : Everything about artichoke plant : How to Plant & care for fern

One of the most important medicinal plants is echinops, which is grown in Iran as a wild plant and can even be cultivated. This plant species has been the basis for the production of various medicines in the world, which is used in combination with other medicinal compounds.

Due to its unique beauty, dried echinops have many usages in interior decoration design as well as in traditional medicine and pharmacy. Dried echinops is one of Iran’s export goods and has provided a great opportunity for Iranian traders to bring a lot of currency to the country by exporting dried echinops . Both types of echinops plants products can be exported either as medicinal plants or as dried flowers because each has its own customer. 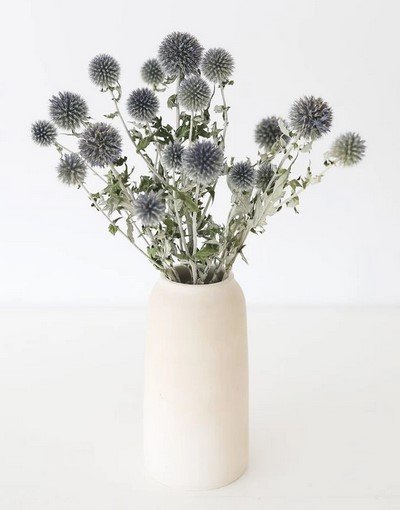 Propagation of echinops is usually done by seeds.

In spring planting, the fruits ripen gradually from early summer. When the fruits ripen, the florets dry out and long white fibers ( papules ) appear. The color of ripe fruits is brown and shiny. Ripe fruits are easily separated from the plant and scattered around. Capitols are usually harvested in one step.

Late July to early August is a good time to harvest. Because echinops has large and dense leaves and is surrounded by many razor blades. Harvesting capitols by hand is very problematic. In small areas, capitols can be harvested with a scythe, but in large areas, harvesting is possible only with special machines. After collecting the fruit, they are kept dry and clean and kept in a suitable place. Seed yield depends on various factors of climatic conditions and harvest method. 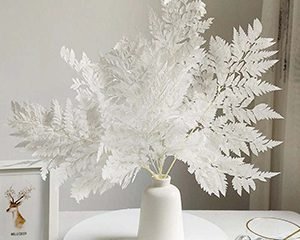 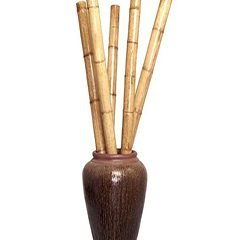 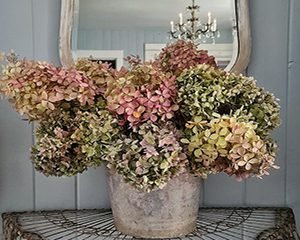