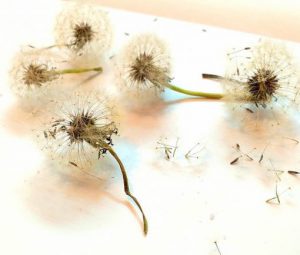 The dandelion flower with the scientific name of Taraxacum belongs to the Asteraceae family (star flower), which in traditional medicine is known as Tarkhshqoon or Tarshqogh and belongs to the chicory family. It is a perennial herbaceous plant whose stem reaches a height of 40 cm. This plant has a yellowish brown root that is full of white leachate.

The leaves are green and hairless and have triangular cuts and sharp points that are between 5 to 45 cm long and 1 to 10 cm wide. In spring and summer , beautiful yellow flowers appear on this plant that have a diameter of 3 to 5 mm and are both male and female. The lingual petals of the flowers gradually open in a circle from the inside out.

The flowers close in their several days, at night, when it is raining and when the weather is dry. The fruit of this plant is hazelnut and has a bunch of silk threads at the end, which is called dandelion. Because it flies to sow. Dandelion flower is self-fertile. The parts used in this plant are usually its roots and leaves.

This plant is distributed on the planet in such a way that it often grows in northern Europe, West Asia, North Africa and North America. Up to ten species of this type of plant are known so far.

Dandelion flowers are found by car on most farms and plains, in the middle of grass, on the edge of saline fields, along roadsides and barren lands, and in general everywhere, which is known as a weed, but you should know that dandelion is a Weed is beneficial.

Because it draws nutrients to the top of the soil and helps plants with shallow roots to absorb nutrients and bring in extra minerals and nitrogen into the soil. It also attracts pollinating insects and releases ethylene gas, which helps the fruit ripen. They also have tremendous benefits for human health.

This plant is usually grown as a car and is less propagated. Propagation is by sowing seeds. (Apply in a cold frame) Germination takes place within 2 weeks.