Dried giant reed : giant reed, (Arundo donax), also called arundo or giant cane, tall perennial grass of the family Poaceae. Giant reed is found in wetlands and riparian habitats and is thought to be native to eastern Asia; the plant has been widely introduced to southeastern North America, the Caribbean, and parts of the Mediterranean.

The woody tubelike stems of giant reed have been used in the manufacturing of flutes and organ pipes and are the source of reeds for woodwind instruments. The straplike leaves are used to make mats in some places. The plant also has been used for erosion control and in highway beautification programs, though it is considered an invasive species in many areas outside its native range. 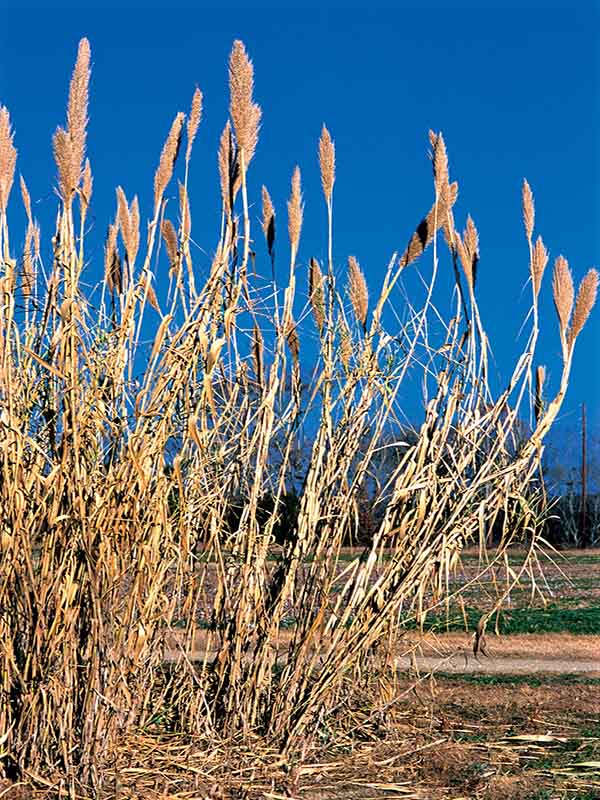 Giant reed is 1.8 to 7 metres (about 6 to 23 feet) tall and grows in dense clumps. The flat leaves are often 60 cm (2 feet) long and about 7.5 cm (3 inches) wide and are borne alternately on thick canelike stems. The plant spreads aggressively by rhizomes (underground stems) and can form vast monocultures in favourable environments. The feathery flowers, borne in plumes up to 60 cm (2 feet) long, are usually seedless or sterile.

In different areas of Gorgan, Mazandaran, Gilan, Khuzestan, Yazd, Fars, Khorasan provinces, it can be seen as a car, but today, due to its use as a windbreak in most provinces, including Kerman, Sistan and Baluchestan, Tehran, Semnan and Isfahan is seen as planted.

These species can be distinguished by the following differences :

A. donax is also quite similar to Phyllostachys aurea (golden bamboo), Phyllostachys nigra (black bamboo), Arundinaria simonii forma variegata (arundinaria reed) and other bamboo species (e.g. Bambusa spp.). However, all these species can be distinguished from A. donax by the presence of a strongly constricted lower leaf blade, which resembles a short leaf stalk (a pseudo-petiole). In contrast, A. donax has a relatively broad leaf blade base with a membranous ligule.

Flowering of this plant takes place in mid-summer. This plant has a similar to a bunch of bristles, which contains many flowers with a fluffy and puffy appearance due to the presence of soft feathers on the mature seeds.

The cluster inflorescence of this weed is initially purple-gray in color, but with maturity in July to August it turns golden-brown with a puffy appearance.